On the East Coast, most of us woke up from a long weekend to news that Microsoft had purchased Nokia’s mobile hardware manufacturing business. The news didn’t exactly come as a shock, given that the companies had announced a particularly Microsoft friendly operating agreement where Nokia Lumina phones would ship with Windows. What did surprise me was the general skepticism and outright negativity surrounding the deal. From Fred Wilson to the several threads on Hacker News, it seemed like everyone was happy to discount this deal as DOA and go back to arguing about Android and iOS. Personally, I wouldn’t immediately count a combined Microsoft & Nokia team out of the mobile fight for a couple of key reasons.

Consumers are fickle and upgrade cycles are short

This point was brought up on Hacker News and I think it’s one of the key points surrounding this discussion. Consumer attitudes and loyalty surrounding consumer electronics have historically been fairly transient. Six years ago, the iPhone was just hitting store shelves and every teenager was clicking away on a Blackberry. Contrast that with today, where RIM is largely an afterthought and Apple is clearly the dominant player. Discounting that a combined Microsoft/Nokia team could make significant inroads

Along with volatile loyalties, consumer electronics, especially mobile phones have a short upgrade cycle. Compared to desktops or laptops, most American consumers predictable replace their cell phones every 2 years because of free carrier upgrades. Because of this, the mobile phone ecosystem has the potential to change and evolve at a much faster pace than it’s predecessors. This tight upgrade cycle benefits Microsoft/Nokia since it gives them the opportunity to iterate and improve devices much faster than say in the console market where Microsoft has previously used this strategy.

Several comments around the web today pointed to the staggering number of iOS and Android devices already in the wild and made the contention that it doesn’t even make sense for Microsoft to compete. Their primary contention was that since users select a mobile OS based on available apps and developers will only build apps for the biggest platforms there’s a vicious cycle of the less popular platforms not garnering developer attention or user adoption.

The absolute number of available devices is obviously important to developers but it isn’t the only thing they care about. Resource constrained startups are still often building iOS first or iOS only and even larger companies also sometimes focus primarily on their iOS builds. Reasons for this range from everything from the lack of device fragmentation to the engagement and willingness to spend of iOS users.

A combined Microsoft/Nokia should be able to control device fragmentation and also have the software engineering chops to create a best in class toolchain. Visual Studio is generally regarded as a fantastic IDE and if Microsoft can parlay it into creating a true “mobile first” IDE I think they’ll be able to attract developer talent. Another interesting angle is what approach Microsoft takes with HTML5/JS, especially “crossbuild” tools like PhoneGap and Titanium. Playing from third place would give the combined Microsoft/Nokia ample reason to support these crossbuild tools to get more apps onto Windows.

It’s becoming clear that the “battle” for consumer living room’s is far from over. With the proliferation of InternetTV devices like the Roku and AppleTV to the announcement of next generation consoles, it’s clear that companies are still very interested in “owning” the living room. The lay of the land is also constantly changing as companies move throughout the value chain. So where does that leave Microsoft? Well its not clear. There’s clearly a lot of XBoxes in living rooms and they’re years away from having any unified mobile + living room experience but that could ultimately serve as a key differentiator and bargaining chip with content owners.

Facebook has always wanted deeper integration on mobile and their Android Home app only solidifies that fact. Microsoft and Facebook also share close ties, Microsoft was a large, pre-IPO investor and Bing is currently powering Facebook’s web search. Given this close relationship, it seems obvious that the two companies would work to tightly integrate Facebook into a phone that was developed in-house. The results could obviously go either way, but there’s no denying that social has helped drive mobile adoption in the past.

However, despite their combined potential the two companies are still facing frighteningly large challenges. With Balmer’s announced departure, the biggest one is certainly who is qualified and willing to lead such a large, multifaceted, corporation down a path that will certainly involve uncomfortable if not downright impossible choices. In any case, consumers and developers shouldn’t count Microsoft out just yet, if nothing else to prevent a Goolge/Apple duopoly in the mobile space.

Over the past few days we’ve been working with one of our clients to develop an enterprise search solution for one of their databases. Due to various historical reasons, the database is on MS SQL and has to stay that way. No worries right? Fail.

I decided to move forward with Solr because of its DataImportHandler feature and its ability to easily expose search results in various formats (JSON, XML, PHP serialized objects, etc).

For some reason I can’t seem to get MS SQL server to open on the port it is configured to. This proved particularly hairy to debug because I couldn’t tell if my JDBC DSN binding was failing, the JDBC driver was failing, or if the DB server was actually mucking it up.

The JDBC URL I’m using is:

To try and narrow things down, I used the Eclipse Data Tools package to let me use a JDBC driver from within Eclipse to connect to the server. Using this, I could clearly see that the exception being thrown was that the MS SQL server was not accepting connections on port 1433.
As far as I can tell MS SQL is set up correctly. 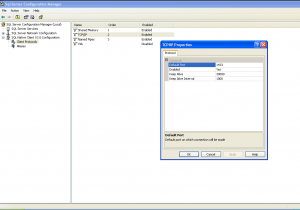 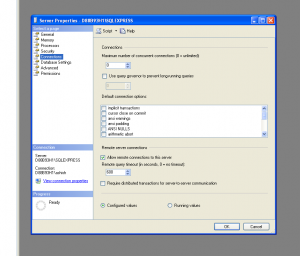 I checked the MS SQL start up log and it was showing this:

Server is listening on [‘any’

I tried using 1170 in Eclipse and Solr and bang everything fell into place.

What is weird is that the configuration is showing that the server should be running on 1433.
If anyone has any idea why this is happening I’d love to know for future reference.