According to a study by researchers at the University of Warwick Business School, using publicly available data on financial related search terms from Google Trends may help predict what the stock market will do.

In the study titled “Quantifying Trading Behavior in Financial Markets Using Google Trends” researchers tracked about 100 financially related terms such as “debt,” “crisis” and “derivatives” from 2004 to 2011.

In order to test their theory, the researchers created an investing “game” to see if the terms searched in the previous week to any given closing day could predict the Dow Jones Industrial Average (DIJA).  If searches for financial terms went down, they opted to buy and hold stocks.  Conversely, search term volumes went up, the researchers would sell assuming that the stocks were going to fall in value.

The game follows the logic that if people get anxious about the stock market, they will likely seek out information on financial issues before trying to get rid of their stock.  It almost goes without saying, the first place people go when seeking information on just about anything is Google.   So then, the idea was that finance-related searches on Google should spike before a stock market decline and vice versa.   Thanks to Google Trends, the public now has access to aggregated information on the volume of queries for different search terms and how these volumes change over time.

The researchers further found that “debt” was the most reliable term for predicting market fluctuations.  By buying when “debt” search volumes dropped and selling when the volumes rose, the researchers were able to increase their hypothetical portfolio by 326%.  The chart below from the research report illustrates these results:

The second chart, also from the report, shows the relative search volume change for the term “debt”  vs. time series of closing prices for the DIJA on the first day of trading each week.   If you look closely, immediately after every bright red spike in volume change, the index values drop and vice versa.

If you are like me, the results from the study immediately brought out my skeptical side so I figured I’d play around with Google Trends myself.   I compared the Google Trends volume reports for “debt” vs the DIJA for the month of January and April 2013.  As you see below, there is an inverse correlation: 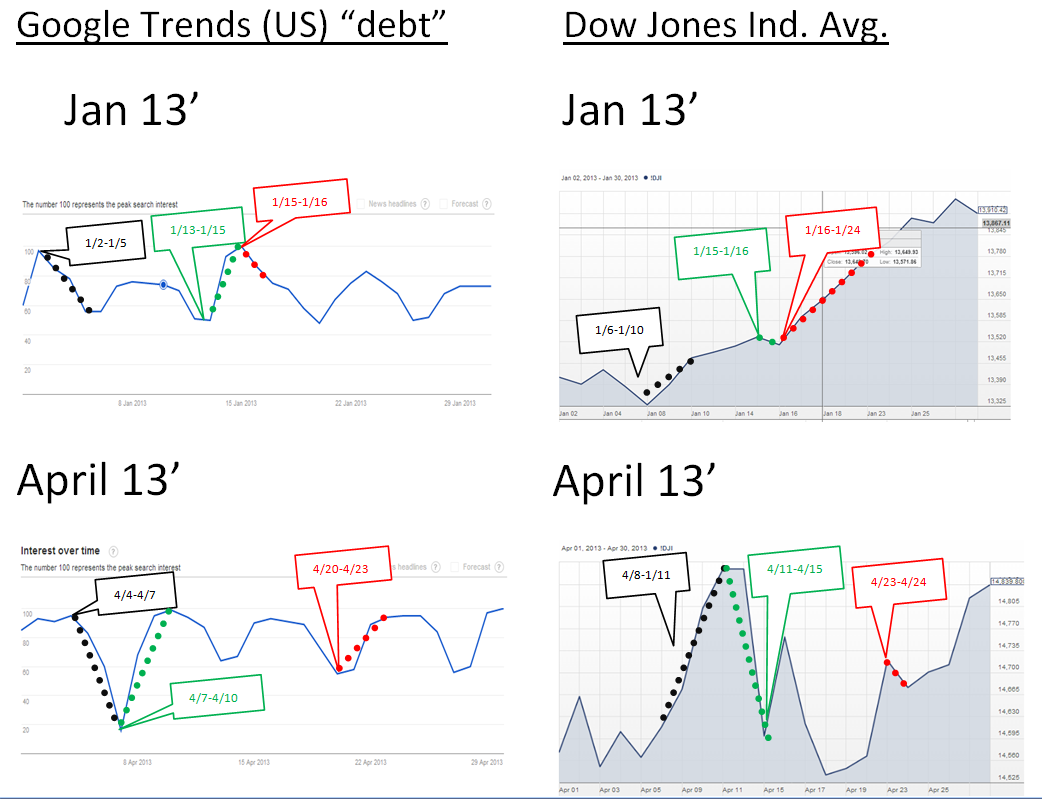 I’m still not completely sold, however, since it’s always easy to look back at data and make obvious correlations. It’s another thing to predict future movements of the market.  Obviously, there are many factors that influence a market participant’s decisions other than information obtained through Google searches and an unlimited number of factors that affect stock prices.

There will never be a “silver bullet” for predicting the market but the idea behind this study is certainly intriguing and could potentially be used to create another tool to be used by investors in making informed decisions about the market.  For example, this study was done at the “macro” level focusing on vague terms such as “debt” and analyzing an index that represents the broad market.   What if the same concept could be applied to market segments or even down to individual stocks whose prices are particularly affected by investor sentiment such as Apple.   Is it possible that analyzing a certain set of Apple related search terms could provide similar results as the original study at the individual company level?

Maybe or maybe not… but who wants to give me some money to play with to find out?  :)