This is the first of a series of short blog posts highlighting interesting local Boston tech startups – up to bat is Tomorrowish, whose company tagline is “The First Social Media DVR”. 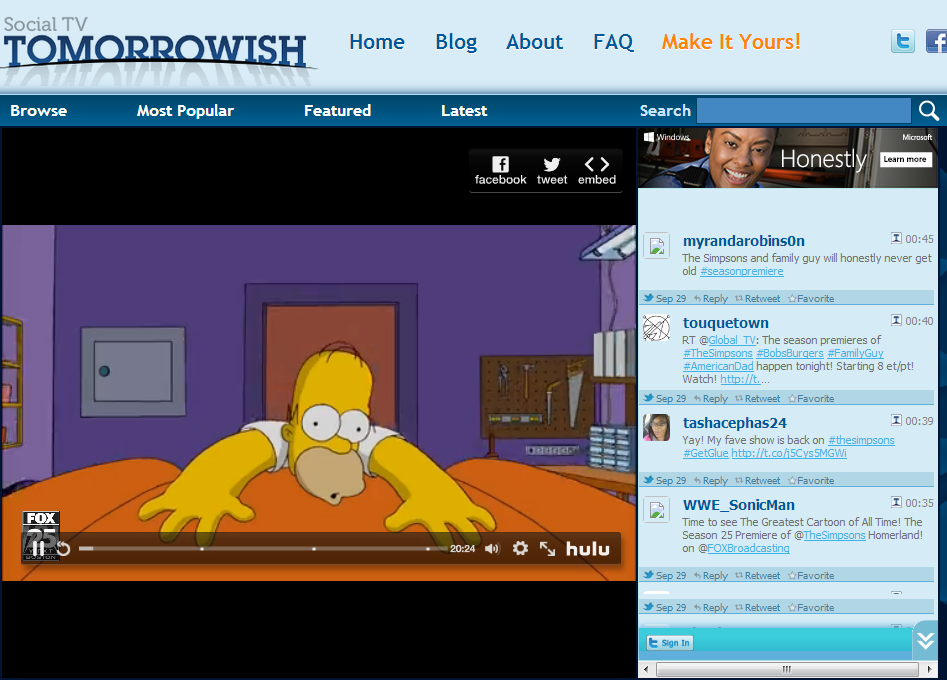 Initially founded 2011 under the name “TweePlayer”, the company was re-branded to “Tomorrowish” in 2012 and is currently headquartered in Cambridge, MA. The privately held company is now looking to raise $1.5 million in funding with a focus on the US Market.

Tomorrowish’s tools and services are targeted towards creators and viewers of digital media.  For creators, their platform lets them capture, curate, and stream social media commentary about their broadcast. That conversation is archived and synchronized in time with the media. When their content is viewed at a later date, their audience can engage in both the current conversation as well as what others have said about certain moments during of the show. Tomorrowish supplies creators with APIs and white-labeled customizable widgets and services to stream the content.

The “brains” behind their service offerings lies within what they refer to as the Tomorrowish Machine Curation (TMC), an algorithmic system which filters through the thousands of social media comments about a show and chooses the most interesting ones to display.  It also uses standard metrics such as popularity and language, along with customized black-listing and white-listing rules to further filter content.  Additional manual filtering can also be applied if the content provider wants to make sure a certain phrase, person, or keyword is included (or not).

Here’s a link to a youtube video and accompanying slideshare posted by Mick Darling, CEO at Tomorrowish from a presentation given at Turner Broadcasting’s Media Camp Demo-day on Sept 12th 2013.

You can read more about how it works at http://tomorrowish.com/.

Stay tuned for the next Boston tech start-up spotlight!